This post contains affiliate links, which are marked with an asterisk (*). This means that if you click through and buy something I’ve recommended I will make a small commission from it at no additional cost to you. Find out more about affiliate links by visiting my policies page.

For the past 4 years or so, Oscar, my youngest, has been a complete nightmare when it comes to going to sleep at night. For two years straight he barely slept a wink, and when he started reception year at school he was somehow managing to stay awake all day and all night as well. It was crazy!

Then, one day, I discovered a simple trick that helped him fall asleep fast. This worked really well for a while, but then he slowly got back into the habit of staying awake all night. I couldn’t believe it. Anyway, a friend of mine suggested letting him co-sleep with me, and for the last couple of years, that’s what he’s been doing. It’s been going really well, and most nights he’s fast asleep by 10 pm and wakes up around 7:30 the next morning ready for school. It’s been such a relief. The only problem is that he’s almost 6 and a half now and he’s started to ask if his friends can come for sleepovers, and, of course, I’ve had to say no since he still shares a room with his mummy!

So, last week Oscar decided he’s big and brave enough to stay in his own room now, and ever since then, we’ve been throwing around some ideas for how we could decorate it so he actually wants to stay in there. And for today’s post, I thought I’d share some of the ideas we’ve had with you guys here on our blog in case any of you guys are decorating your little boy’s room and need some inspiration. I hope you enjoy it … 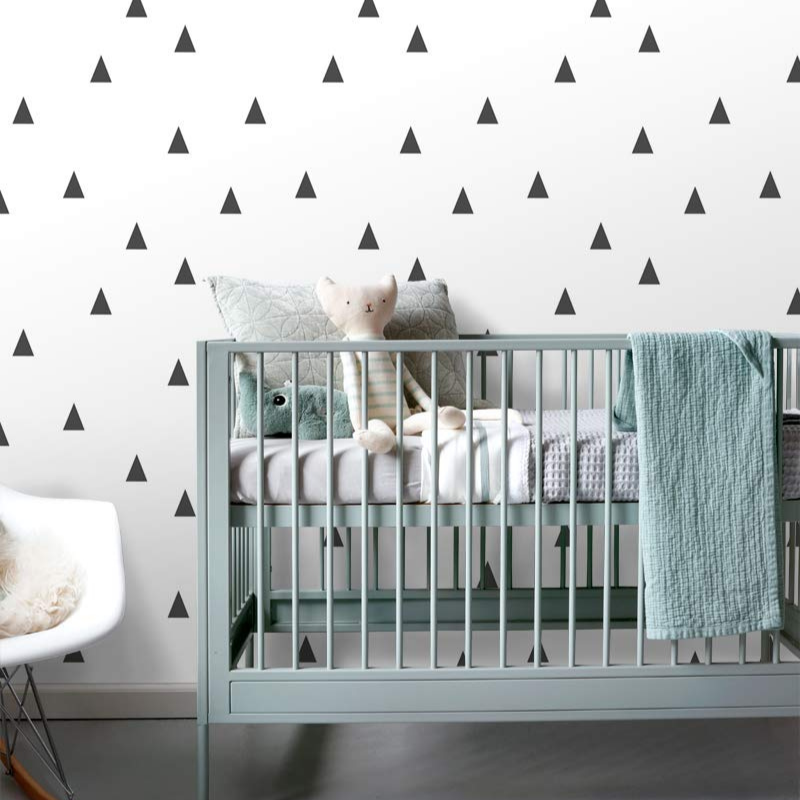 First up, Oscar’s picked out this gorgeous white wallpaper with black graphical triangles.* I think it looks really funky, and I plan to just paper one wall with it. This will most likely be the wall next to his bed, and then we’ll paint the other 3 walls in a nice white paint to go with it. The theme Oscar’s going for with his new room is Batman, and as most of the things he’s picked out are black and white in colour they’ll go nicely with the walls. 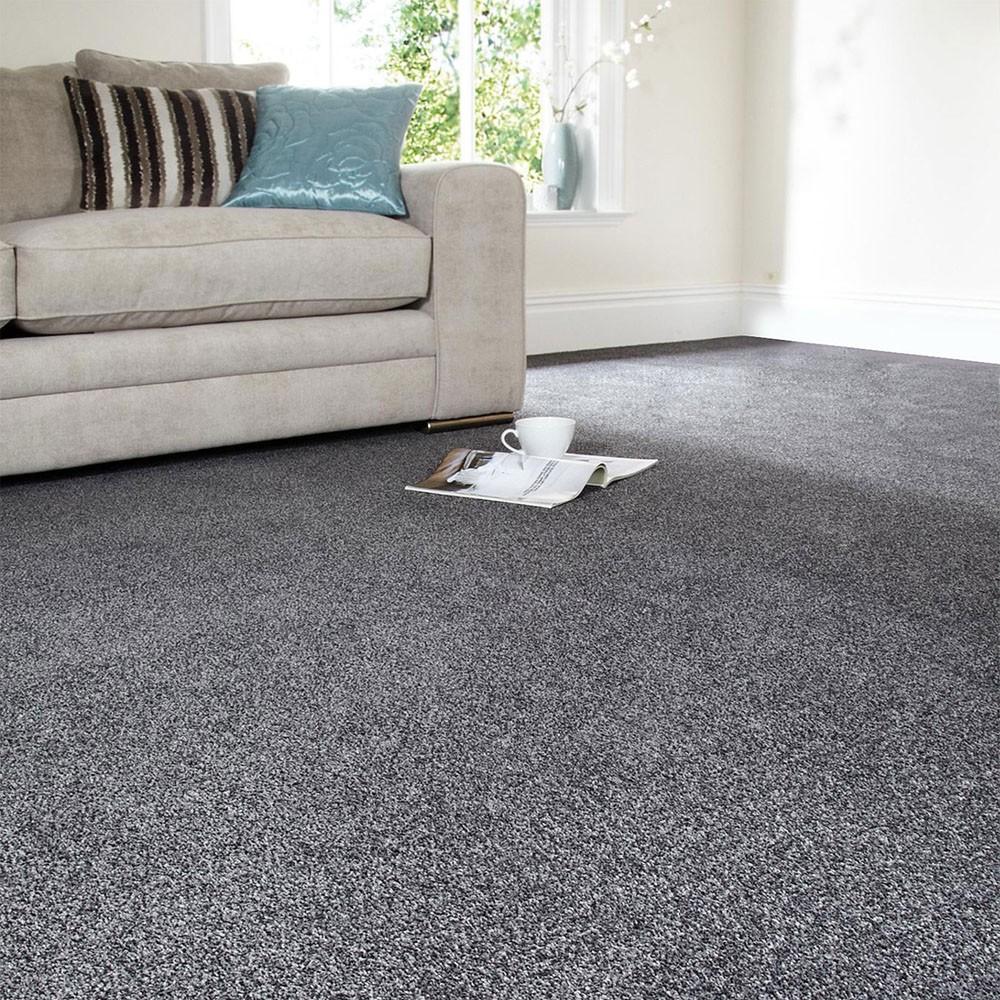 Next, Oscar’s chosen to have a grey carpet fitted in his bedroom. He currently has laminate down but he said he’d rather have carpet down as he prefers sitting on it when he’s playing. And as we’re most definitely going to be keeping his toys in there I’m more than happy to let him have what he wants. We’ve decided to go with this beautiful Dublin Heathers Carpet in the shade ‘Mouse’ from OnlineCarpets.co.uk as it matches the carpet in the rest of the house.

As we’re hoping that Oscar is actually going to sleep in his new room we decided to let him choose his own bed this time around. And, like any typical 6-year-old boy, he’s gone for a really fancy one! It’s a single mid-sleeper from Wayfair with a cool den underneath. It’s perfect for giving him a little extra space to play in, as his room isn’t that big. I’m also hoping we’ll be able to squeeze the mattress from his old toddler bed under there when his friends do eventually come for a sleepover. Otherwise, I’ve no idea where we’re going to put them!

A new bed most definitely deserves new bedding, and earlier today I ordered this gorgeous Batman bedding* I found on eBay. Isn’t it fab!? I ordered a single set and it includes a duvet cover, fitted sheet and two pillowcases. It’s such great value for money! The duvet is white with grey stripes and has Batman masks, stars, clouds and lightning bolts dotted all around it. I can’t wait for it to arrive as I just know that Oscar’s going to love it. It’s right up his street!

As soon as Oscar found out I was going to do up his bedroom for him, he asked if he could have some prints to hang on the wall. So, I decided to treat him to this set of three Batman prints from Retrodora.com. I think they’re super cool and will look fab in any Batman-inspired room. I think I’d rather put them on a picture ledge rather than hanging them on the wall, though. I think they’d be much safer there! There are loads of different Batman prints available on the Retrodora website, but these 3 are our favourites by a mile.

The first one says ‘Na-Na-Na, Na-Na-Na, Na-Na-Na’ in black and white, the second one has a picture of Batman’s mask (and can be personalised with the name of the recipient) and the third one says ‘Always be yourself. Unless you can be Batman. Then always be Batman.’ So cute! Unfortunately, the prints don’t come with frames. But Amazon sells cheap white ones so I’ll just pick some up from there when they arrive.

If there’s one thing Oscar has a lot of, it’s books! So while we’re doing his bedroom up I thought I’d get him this stunning white bookcase with grey lettering on from Tidy Books. I think it matches the rest of the decor we’ve picked out perfectly, and it’s a great way for Oscar to display his favourite books. I really like the books sit on the shelves with their covers facing forward as well – it will make choosing a book at bedtime so much easier!

No little boys room would be complete without a toybox to store all of their toys in! And I just love this beautiful white toybox from the Great Little Trading Company. It’s said to be safe and easy for little ones to use, thanks to its lower height and the sturdy safety hinge on the lid. It features a classic tongue and groove finish and is painted in bright white paint. I think it will complement the rest of the furniture in the room perfectly, and I just know that this is where Oscar will end up keeping all of his Toy Story toys as he’s always wanted a toybox like Andy’s!

Oscar is a stereotypical second child, and loves to wind his big sister up after school! Due to this, I tend to use reward charts to encourage better behaviour from him, so when I spotted this ‘You’re a Star’ Reward Chart on the Great Little Trading Company’s website I just knew I had to get it! The idea is that it works like traditional reward chart, but instead of sticking a star to a chart you pop one of the rainbow stars included into the cloud every time your little ones have been good – and once they get a full box it’s time for a treat!

The cloud is made from wood and has a painted finish and acrylic safety glass. It comes with 16 wooden, multi-coloured stars and has a magnetic closure so once the box is full you can easily get the stars back out again. The stars can also be stored in the back compartment, which I think is fab. I think they might look a bit out of place in the room with them being coloured rather than black or grey, but I’m going to give them a try anyway.

I think while Oscar gets used to sleeping in his room, he’s really going to need a night light on throughout the night. So when I spotted this cute little Batman one* at Amazon I just knew I had to get it! The night light is shaped like the man himself and is powered by 3 AAA batteries, so I can place it anywhere in his bedroom without having to worry about plugging it in. At the moment I’m thinking I’ll either place it on top of the radiator (as it has a radiator cover on) or get one of those little bunk bed shelves so I can stick it right at the side of him when he’s asleep. I haven’t shown him the night light yet as I know he’ll want to use it as soon as he sees it, but I just know he’ll love it!

If there’s one thing Oscar’s bedroom desperately needs at the moment, it’s blind’s! And the ones I have my eye on for him at the moment are these traditional white wooden blinds from blinds2go. I think they look really classy, and they’ll be much easier to clean than curtains as I won’t have to keep taking them down and then putting them back up again. I just love them!

And there you have it, 10 things we’re going to be updating Oscar’s new bedroom with. I’m sure we’ll add loads more things to it before we’ve finished, so I’ll do a full room tour here on my blog once it’s done.

What do you guys think of the things we’ve picked out for Oscar’s new bedroom?
Let me know in the comments below.

Why not come join my Facebook Group where you can chat to like-minded people, share cleaning tips, products recommendations, home inspiration, recipes and much more.

Hi, I’m Lou! A 30-something mummy to two beautiful children – Stacey and Oscar. I’m a passionate writer, a self-confessed beauty junkie, and I own way too many handbags. But that’s OK, right? Everyone has to cart their junk around somehow!

I started this little blog in April 2019 to talk about all things home and lifestyle and I really hope you enjoy having a read. Come along and join me by following my social media below. It would be great to get to know you.

I gave the soleplate on my iron good old clean wit

Absolutely love this year's school photo of my kid

Burning my fave Christmas Candle while I wrap a fe

I'm not a massive fan of living in rented accommod